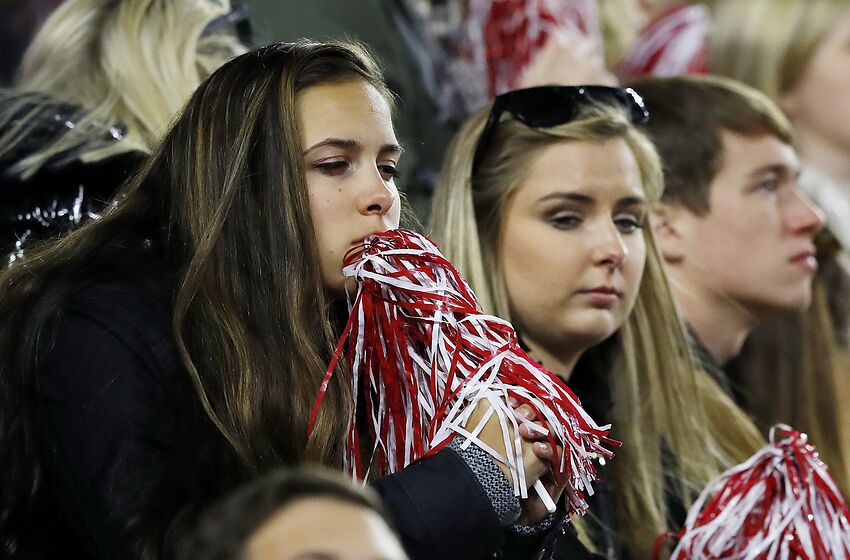 With a loss to rival Auburn in a historic Iron Bowl, Alabama football will miss the College Football Playoffs for the first time. On social media and beyond fans are calling for changes to the roster and coaching staff. Is that what Alabama really needs?

Well fellow Alabama football fans. That one stings. Auburn caught every break and Alabama made every mistake and the result was a stunning 48-45 loss to Auburn on the Plains.

Alabama remains winless in Jordan-Hare when Auburn is ranked. Auburn gets to gloat again about spoiling the Crimson Tide’s hopes at making another championship run.

Make no mistake, I’m just as upset as the rest of you, but Alabama shot themselves in the foot. Two pick-sixes, 13 penalties, and a missed field goal are not the recipe for winning games. It’s a minor miracle that Alabama football was still in the game with a chance to tie given all the mistakes.

As soon as the flag was thrown and the call for illegal substitution made, fans across the country were calling for changes to the coaching staff. Aside from the usual rumblings about the kicker, the number one target was Defensive Coordinator Pete Golding.

Message boards and social media were filled with calls to remove Golding. They say the defense has been poor for two seasons and something must be done to fix it.

I only have one thing to say about that…

To quote the great Aaron Rodgers, RELAX. There should be no changes by Saban to the coaching staff. Pete Golding is one of the brightest young defensive minds in the game and not only is he still learning, but he was given an almost impossible situation on this year.

When fall camp started, Golding had one of the most talented defenses ever under Nick Saban. Butkus award finalist Dylan Moses was returning along with Raekwon, Ray, Surtain, McKinney, Carter, Lewis, Jennings, Mayden, and Diggs. They were being joined by talented Freshmen Battle, Lee, Dale, and Alfano.

It should have been an incredible defense on the level of 2011, 2013, and 2009, but fate had other ideas. First, LB Joshua McMillon, Moses’s counterpart, went down for the season. Dylan Moses followed soon after going down with an ACL tear. Then the depth was hit when Eyabi Anoma and later on Antonio Alfano decided to transfer.

This thrust Freshmen Shane Lee and Christian Harris into the unenviable position of not only starting but running the complex and nuanced defense of Nick Saban. Saban himself admits that trying to learn his defense is no easy task. Only the best of the best ever get it and even then it usually takes 2-3 years.

Still, the freshmen played admirably early in the season. Albeit against inferior opponents. Then, the injury bug struck again. LaBryan Ray went down, then DJ Dale. Even Raekwon Davis struggled to remain healthy dealing with minor injuries throughout the season before sustaining an injury against Mississippi State that cost him 1 game and put his status for the Auburn game in doubt.

These are not small injuries. These guys are all superstar caliber players. The injuries became too much for Golding or even Saban to be able to coach through.

So, let’s not throw Golding under the bus because it is the easy thing to do. Alabama football fans are going to have to do the hardest possible thing for any fan to do. Be patient.

Next season looks bright with the likely return of Ray, Dale, Battle, Surtain, Lee, and Harris along with all of the incoming Freshman talent. Not to mention we are waiting to hear the official NFL Draft decisions of Juniors Dylan Moses, Xavier Mckinney, and Terrell Lewis. Even if all three leave the defense will be vastly improved in 2020.

When every season is national championship or bust, fans can become restless and overreact when things don’t go to plan. It’s easy to place blame and demand changes be made, but now is the time to practice patience. At this point more than ever Alabama football needs consistency on the coaching staff. Stand pat and Alabama will be back in the title picture next season. Guaranteed.