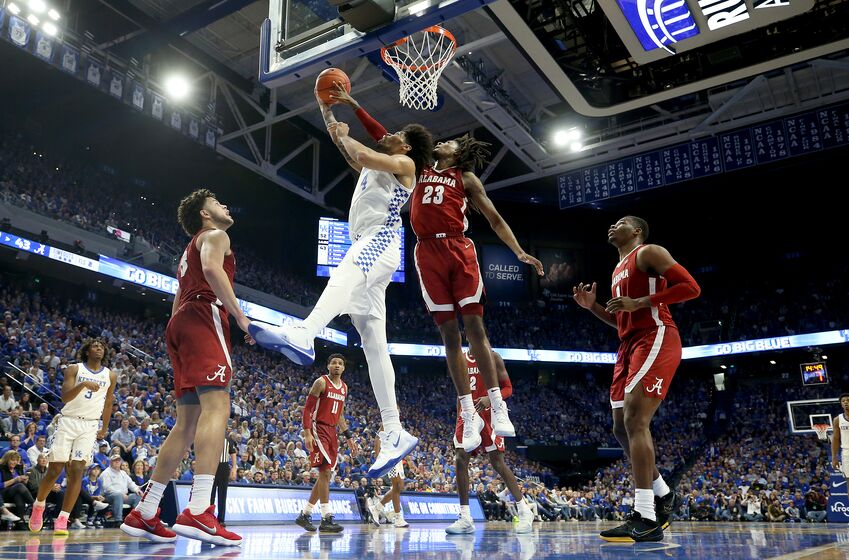 LEXINGTON, KENTUCKY - JANUARY 11: Nick Richards #4 of the Kentucky Wildcats shoots the ball against the Alabama Crimson Tide at Rupp Arena on January 11, 2020 in Lexington, Kentucky. (Photo by Andy Lyons/Getty Images)

Alabama basketball opened SEC play with a tough road schedule, traveling to Florida and Kentucky. Check out where we rank the Tide compared to the rest of the SEC.

After playing two of its first three SEC games on the road, Alabama basketball has an SEC record of 1-2. The Crimson Tide’s overall record is just above .500 at 8-7. The next Tide game is home against Auburn. The Tigers are one of two undefeated Division One teams in the nation.

Auburn is ranked No. 4 in the AP Poll; No. 6 in the NCAA Net Ranking and No. 15 in Ken Pomeroy’s analytics. Pomeroy’s subscription site kenpom.com is a superb resource for serious college basketball fans. Tracking his ranking is a good way of determining the chances for Alabama basketball to make the NCAA Tournament.

Other top-ranked SEC teams are:

Even with its 8-7 record, Alabama basketball is ranked high enough in the NCAA Net (No. 61) that it can move into the list of above teams as the season progresses. Pomeroy values the Crimson Tide even higher at No. 53.

Most Alabama basketball fans realize Nate Oats is building a different program than Tide teams of the last decade. Progress is evident and results will follow. When those results will follow and will they be enough for a NCAA bid is to be determined.

Each week for the remainder of the college basketball season, Bama Hammer will present a SEC Power Ranking. It is simply a listing of the best SEC teams from top to bottom. Actual win-loss records are a guide but do not determine each week’s rankings. Bear with us. The season is still young and picking the bottom six at this point is difficult.

The rankings can elicit debate. Without trying, our rankings are similar to how Ken Pomeroy ranks the teams, with one big exception. We rate Mississippi State much higher. The reason is State has played 10 of its 15 games without its best player, Nick Weatherspoon. Alabama did blow out the Bulldogs after Weatherspoon’s return but they lost by one, on the road at LSU, in their last game.

Next: Nick sticks with it!

That’s it Alabama basketball fans. Use the comments section to add your thoughts on ranking the SEC basketball teams.